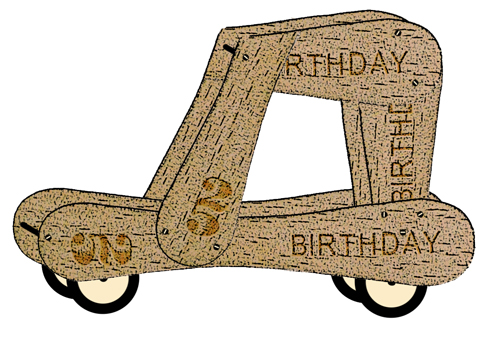 Don't you think that life is sweet? Well, to be honest, not really. Although? In the beginning it showed traces of a fairy tale. Like when I saw my reflection in the Magnum-wrapper. I mean, how many ice-sticks do you know that have 'Birthday' and '25' engraved into their wood. I thought that looking different would mean getting a special treatment. At first everything pointed in that direction. The cries of joy I heard, when a child got one of my frozen buddies, were so heartwarming, I almost melted. You never expect that sort of welcome, especially when other snippets in the wood processing company keep telling you, that you are of the cheapest sort. But the tender touch, with which I was lifted and held, was so reassuring. I just knew, that I wasn't like other ice creams. However, what I could never have imagined is how things changed, once my cream was consumed. After lying around on a table for a while, without, I must add, never being noticed, I was put in a jar. Well, crammed in, that is. Like the cupboard in which it stood, there was hardly any room to move or space to breeze. What made me feel even more unhappy, was the fact that it looked like all the other, 'ordinary' ice-sticks had no dignity at all. They started shouting that I should leave, as the jar was filled up enough. And once they saw my engravings they couldn't stop joking about it. "Look at how ugly he is marked for life!" "Oh, we thought you were much older than that!" "How's granddad doing?" "There is no ice cream in the world that wants to be held by such an old stick!" But once the other sticks got tired of the jokes more worrying matters occurred. They talked about how sometimes a stick got taken out, never to return again. They were all frightened to be next. When I asked what happened with them, I was told that they were being used for the lawn mower. An ice-stick next to me said: "We noticed it one time when the cupboard-door was left open. We saw how the stick was pushed between the holder of the cutter blades and the wheel carrier. This bloke said to a lass opposite him; "It is the perfect way to reduce the clearance in this old machine". But the sad thing is, that you don't survive a trip with this lawn mower. In the end there is hardly anything left of you". I told them action should be taken. "But, we can't do anything", one of the ice-sticks remarked. "The jar is closed, so we can't get out". Nonsense, you could escape when they open it for another stick. Or, you could take real drastic measures. Like when we all start to jump up and down, the jar will, eventually, rock so hard, that it will fall out of the cupboard and break. "Oh no, we don't want that to happen", a majority of sticks shouted collectively. "It might mean, that we don't survive the fall". "And as we are packed tightly together, there is not much room to move, let alone jump", one of them added. So we all stayed in the jar, waiting for an opportunity to slip away. Mine came quiet quick. Although, it wasn't really an escape, it looked like they were searching for me. When I was found and placed on the table, I learned, by my horror, that I wasn't the only ice-stick with 'Birthday' and '25' engraved in his body. Magnum made a pile of us. As you can imagine, I was really disappointed. So, I wasn't unique! But there was no time to cry over it as two small hands were picking up the different sticks and putting them together. After awhile I started to enjoy myself. Being engraved is special, no one can deny that. But I felt even more distinguished by the fact, that I was used for something no one could ever have imagined. After an afternoon of play, in which I was part of all sorts of different ideas, things started to take shape. Being put together very carefully, something with the shape of a car emerged. When we saw each other in the reflecting back of the mobile telephone that was on the table we agreed that we looked really beautiful. Although, there was some sadness as some of us had lost a part of our shape. But we found it a blessing in disguise, that we weren't used for the lawn mower. In future we would be the playmates of a young boy. What more do you want!