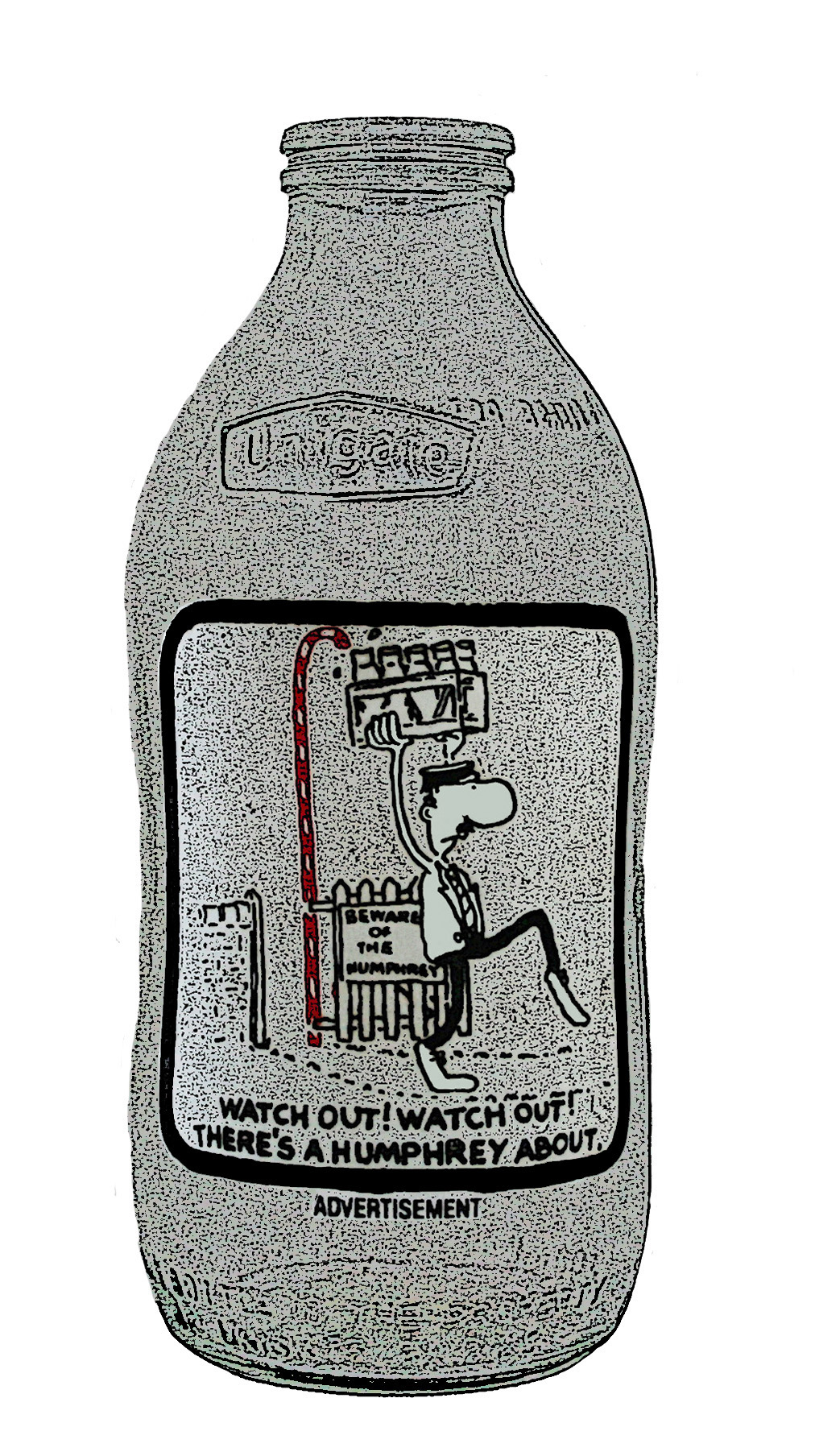 Life as a bottle can be a real adventure. Being my age you can tell. If I look back on the past fortysomething years, I must say that my charisma played a big part. But, almost from the start I knew there was more to me than just holding liquids. Other bottles lacked my brightness. They were red, green or blue. It was almost impossible not to laugh when you met them. I have a firm body, but theirs is almost womanlike with their slim shapes and long necks. When I was just a few days old and still had my spotless, bright and see through body an elderly, somewhat scratched bottle next to me said: "You'll be carrying milk for the rest of your life". Well, that wasn't the future I saw ahead of me. I wanted to make a lasting impression. The old bottle looked at me in a pitiful way and added: "In the early hours of the morning the milkman, who is an eco-friendly person, a pioneer of recycling, driving an electric car to deliver his bottles, will put you on the doorstep of a house. If he doesn't do his job properly or, for instance, is in a bad mood, it will make a lot of noise. Those times are a hurtful event as you are shaken against other bottles in the rack. The next likely thing to happen is a heated discussion between te milkman and angry residents. When you are empty, the user will place you at exactly the same spot, so the milkman can take you along. Unless, of course, things go really wrong in the household you're staying in. I learned that, every now and then, a bottle is dropped. If that happens on a wooden or a stone floor, all is left of you are a lot of pieces. And they will not be mended".

What a sad affair. I had high hopes for a more adventures life. Surely, there must be something more for a bottle besides carrying fluids around. But listening to my old friend all hopes faded. All I could do, was wait for the moment to be filled up with milk. But..! Who knows what might happen, once I was delivered at the front porch. Maybe the residents had totally different plans with me. Before I could swap ideas about the future with my fellow-bottles, I and quite a few others, where taken to another space in the building. There I learned that my spotless and beautiful body would be used for an advertisement. Was that the adventure I was looking for? Well, I didn't have much say in the matter. A man told another worker that putting the adverts on the bottles had meant a boost in advertising. It was the reason why they had been doing it since the 1920's. "The idea behind it was simple: everybody drinks milk. So if you've got a product, you want people to know about, use a milk bottle". With a big smile on his face he told the other guy, that the impact of these small messages was enormous. He added that in the thirties of the last century the milk bottle, he so much treasured, had helped the British economy to its feet. "Can you imagine any other bottle being capable of doing that!" Well, as you can imagine, I felt really proud... although I'm not sure whether that story is true. But what I do know is, that I had no difficulty in being treated by this man. He said, that I shouldn't be afraid. The technique of sand-blasting the adverts on, was over. I wouldn't feel anything and afterwards look prettier than anyone could have imagined. Although there were some 1500 different subjects he could choose from, he said that my body lend itself best for some humor. That is why there is a Humphrey about...

I sometimes wonder if that advert is the reason why I haven't been carrying a lot of milk around. Although I have a sticker on my back saying: 'Please rinse and return to your milkman', that never really happened. I spent a short while in Wales before ending up in an apartment on the other side of the North Sea. In the mean time, I learned a lot. The people I'm staying with considered, for a short while, to use me as a lamp. It would give the advert a different shine, they said. That this never happened, is due to the fact that experiments by other people with fellow-bottles were a disaster. We just can't take the heat. If you leave the lamp on, an explosion will follow, I heard. What they did, was put me on display in the kitchen. A humbling experience. It's so delightful when people glance at you in a loving way and say all sort of sweet things about you. At these moments I feel special. No one can take that away. What I hate, is when I'm picked up. Apart from the fact, that their hands are sometimes dirty and leave stains, it is so easy to drop me. And where is my future than? Lucky for me is, that they recently put me in a little cabinet. It happened after rumours about more and more bottles losing their lives. So it looks like, as time passes, I will become the little treasure, I always wanted to be. What I understand from a conversation I heard in the kitchen, is that milk bottles no longer carry advertisements. They disappeared with the introduction of the infrared bottle scanner in the early 1990's. Our cleanness was apparently more important. And those scanners where designed for that purpose.

All this doesn't alter the fact, that I would have made no objections to being put back on the doorstep. With a bit of luck I would have ended up in London on the porch of Saint Etienne. If that had happened, I might have played the leading part in the trio?s song 'Milk bottle symphony'. Although it isn't such a big part, I might have traveled the world providing the right background noise to the song. Imagine that! Maybe I should try composing my own symphony, let the world know how beautiful our milk bottle sound is. Still I'm lucky in many ways. I don't think I would have been very pleased if I had ended up in The Milk Museum of Steve Wheeler in Worcestershire, a collector for thirty odd years. How can you possibly distinguish yourself when there are more than 20.000 bottles around. I understand that Steve has six garden sheds full of us. I don't say, that it isn't nice to talk to a milk bottle from 1890. His history must be fascinating. But I don?t think you can make much of an impression if there are so many. The same with the museum of Paul Luke. He has some 10.000 bottles on display in Essex. Well, good luck to them. I rather be treated like a novelty. And that is what happens when you are on display in a kitchen.