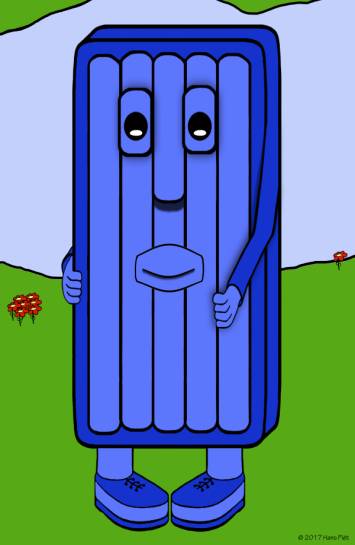 It is not easy being a detective. Take the case that I'm working on. An airbed has disappeared but nobody knows, who ever I ask, whether it is grey, blue, white or whatever colour. I am also told, serveral times, that there is a severe possibility that the air has escaped. He vanished after a swim. The most logical explanation is, that several fish have taken him. Everybody knows how very comfortable such a mattress can be. Every dive I took, has been without result. Possibly because the water is too dirty. You can't see your hand before your face. It's remarkable that residents haven't complained. But than again, maybe they are so tired of bringing this polution to the attention of the authorities, that they stopped doing it. I mean... if no one is listening.

It's a bridge too far for me to take cleaning into my own hands. I'm not really a big earner. I mean, I can manage, but that's about it. What you also should consider, is that there is more to life than searching for an airbed that disappeared. If the mattress stays traceless, I have to conclude, that he doesn't want to be found. Giving the time span of his disappearance, you don't need too much fantasy to see him unwind in his shelter. Maybe he himself let the air escape, thinking that only than rest would be garanteed. It's also possible, that he is searching for adventure. If that is so, I imagine that he has already reached his destination. Maybe he met with a dolphine or a walrus. After the acquaintance they both decided, that working together would only have advantages. I mean, I don't think there is a beter way for him to explore the oceans. On the other hand, his disappearance could be something simple like the weight that has become too much. I mean, how many kilos should you be able to carry as a travelbed. If the user didn't consider that at all, the bed probably didn't like the way he was used. Those kilos became too big a burden to carry. It is not something that you think about, when you start life as an air mattress. At first everything is like a bed of roses. It has all to do with that thrilling prospect of floating on a sunny pond, accommodating a cheerful person. That is almost irresistable. But when a heavyweight starts using you, I can imagine that, after some time, you think: 'is this really necessary. That is not how I saw my future!'

A disappearance like this raises all kinds of questions. That is the charm of being a detective, you are never without questions. The outcome might not always be satisfactory, the advantage is, that everyone is prepaired to talk to you. To lonely people I would say: give it a try! Uh, well... I mean... Maybe it's not such a good idea. You need quiet a few other qualities. And than, there are already enough practitioners. But I digress. It's just not very easy for such an airbed to lead a quiet life. You really don't need a lot of empathy to see what he is going through. Imagine that you are extradited to a few kids. They love to use you as a cushion to jump on. Just when you feel relaxed, floating in the water or lying in the grass, your world is turned upside down. Happy that you lost that too heavy reader, you are stirred in all directions because of a few kids, that are jumping up and down on you. I have considered, purely out of pity, to hand in the assignment. Problem is, that I need to eat. As you might know, it is really hard to earn a living as a detective. You don't get that many assignments. So I really try to solve this case, but in the mean time I think, airbed I hope that you will be very happy in your new surroundings.